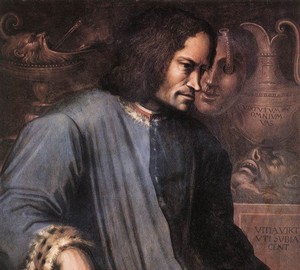 The architect, artist and first historian of Italian art, Giorgio Wazari (1511-1574), wrote this portrait commissioned by Alessandro Medici many years after the death of the person depicted on it.

Lorenzo the Magnificent was the grandson of Cosimo the Elder Medici and concentrated in his hands all the power over Florence, but at the same time patronized artists and poets and wrote poetry himself. The time of his reign was the “golden age” of Florentine art. But this portrait depicts a person who looks tired, immersed in his thoughts, indifferent to both fame and wealth, which the red wallet hints at, and even to the fact that he was declared a “conspiracy of all virtues”, as evidenced by the inscription behind. Vasari expressed longing in the picture for the time when painting, poetry and the words of humanists resonated in the soul of the ruler.