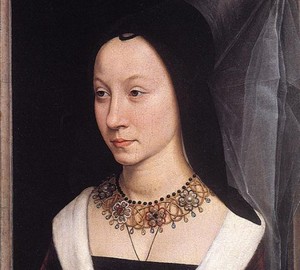 Portrait of Maria Baroncelli – Hans Memling. Around 1470. Board, oil. 42.2×32.1
Maria Baroncelli was only fourteen years old when she became the wife of thirty-three-year-old Tommaso Portinari. Accordingly, the burgundy fashion on a girl has a high headgear, lace-bound, a long blanket that emphasizes her position as a bride. Despite her young age, her appearance is filled with the confidence of a secular lady, and a precious necklace indicates her high social position. Unlike her husband’s dispassion, her image is less strict, and it seems that a slight smile touched her face. X-ray studies of the work revealed that the girl was originally dressed differently: the position of the Burgundy cap (hennin), originally decorated as on the “Triptych Portinari” V-shaped motifs, was more vertical, black draperies fell on the shoulders of a girl whose face was framed by a transparent veil. Changes were made presumably at the request of the customer. It is noteworthy that on the triptych written by Hugo van der Gus ten years later, Maria Baronchelli is depicted in the same dress, with the same precious necklace. Her hand is decorated with a ring with two stones – black and red. Both portraits of the spouses are framed by a marble frame – a technique to which the artist subsequently resorted.