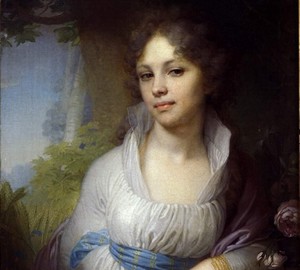 The heyday of the work of Vladimir Lukich Borovikovsky, a famous Russian painter, fell on the reign of Catherine II and Paul I. Under the imperial court, solemn, ceremonial portraits are very appreciated, and the artist completely succeeded in this – he is a recognized master.

In a series of female paintings, Borovikovsky is revealed as a vivid representative of sentimental painting. In his chamber portraits the ideal of a woman of his time is embodied.

This picture – the recognized masterpiece of Borovikovsky – represents the absolute embodiment of aesthetic ideas of sentimentalism. The image of Maria Lopukhina captivates with gentle melancholy, extraordinary softness of the facial features and inner harmony, which is felt in all artistic and picturesque elements of the picture: in the position of the heroine, the turn of the charming head, expression of the face. All lines are harmonious and melodic, the details attract attention. The canvas also depicts flowers – torn and already slightly drooping on the stem of roses. What is it, the sketch of nature or there is some sense? The symbolic meaning of flowers was well known: the beauty of their flowering fascinates, but very soon fades. That is the beauty of a woman.

However, the artist is especially attracted to the nuances in the state of the model, its elusive beauty, the deep sadness of the soul, which he conveys thanks to the almost imperceptible elements of the symbolism and the subtle coloristic solution of the portrait.

According to art experts, “Portrait of Maria Ivanovna Lopukhina” is one of the author’s masterpieces. It can be considered the beginning of a new stage in portrait painting – when the artist does not mean the social position and significance of the hero of the picture, but his personal characteristics – mood, secret experiences. This is expressed in the image of not attributes in the interior, but the surrounding nature.

On the canvas of Borovikovsky – Maria Lopukhina, a young girl of 18 years old, she is from the noble family, the daughter of retired general Ivan Andreevich Tolstoy, the wife of Stepan Abrahamovich Lopukhin. Maria had just got married, and this portrait served her as a gift from her husband. The portrait fascinates and fascinates at first sight.

The girl is depicted against the background of nature, blurry and, as it were, in a haze through which Russian motives are visible – birch, flowers, clouds. Maria in a white, simple dress with a blue belt, covering her figure in the “Greek” fashion, in a sloppy shawl.

A cute, charming face is young, fresh and gentle, she has a dreamy look aimed specifically at you, and a light mysterious smile. According to the author, the whole picture should create a sense of harmony and unity of nature and man.

Borovikovsky managed to convey not only a striking resemblance to the original, but also fill the canvas with poetic, expressed in the airiness of writing and a gentle range of colors. Using the underlying silver, pale blue, gently green colors, the author reaches a special lyricity and sensuality of the image.

According to contemporary artists and art historians of our time, the portrait of Lopukhina is the ideal of a woman of the Russian type, to whom, according to the canons of sentimentalism, Borovikovsky gave the features of gentle sensitivity, and the image of nature as an integral part of the female soul, its essence.

Thanks to the portrait of Borovikovsky, the mysterious beauty of Maria Lopukhina has survived to this day. And the fate of the girl was severe for her, Maria died at the age of 23 from the consumption.

It is interesting that after her death, rumors swept through the city that it was this portrait that destroyed, most recently, a healthy and cheerful girl. On the sidelines, they whispered that supposedly any girl who looked at this portrait would die, because the spirit of the deceased was embodied in it. Most likely, these rumors are connected with the father of Maria, he was a member of the Masonic lodge, was fond of mysticism and had a huge impact on the minds of others.

To some extent, Borovikovsky is “guilty” of these rumors – this is the strength of his artistic talent, his influence on people, how high the aesthetic component of the portrait is, what is the vitality and reliability of the heroine depicted on it.

Only after almost 100 years did these rumors cease to excite people. After the famous Russian entrepreneur and collector Pavel Mikhailovich Tretyakov, he acquired a picture for the collection of his gallery.