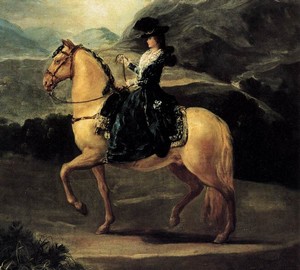 One of the most mysterious Spanish artists, Francisco Goya worked hard at the royal court, where he also painted this portrait of Maria Teresa de Bourbon-i-Wallabriga, the future countess de Chincheon, depicting it riding a horse and against the backdrop of a mountainous landscape. Dark clouds run through the sky, shadows from them on the ground, and nature is embraced by the alarming state that happens on the eve of the storm. But a young woman tries to be collected and hold firmly in the saddle. It is depicted in profile, which gives the appearance some cloth.

However, the figure of the girl is written out with light strokes, they foam lace on her chest and ducts velvet dresses overflowing. The face of Maria Teresa is touched by a blush, all of her looks tender and trepiduous, surrounded by harsh nature with a rocky landscape and rocky mountains. Goya, who had a sincere interest in people, managed to express even in this etyud picture that fragility and at the same time human strength that cause a very warm feeling.