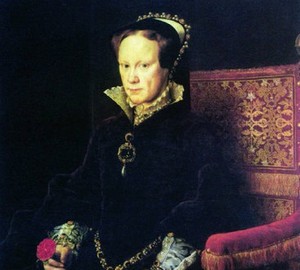 Portrait of Maria Tudor – Antonis Mor (Moro) van Dashhorst. 1554. Oil on canvas. 109×84
Antonis Mor van Dashhorst (between 1517 and 1519-1576 or 1577) is a Dutch portrait painter of the 16th century, worked in the yards of Spain, Italy and England. The master entered the history of European art as the creator of a new type of ceremonial aristocratic portrait, which was widely used.

“Portrait of Maria Tudor” is the most famous work of the master, considered a masterpiece of portrait painting. The Queen of England (entered the throne in 1553) is depicted sitting in a chair, a monastery of luxurious red velvet. Her posture is static, which gives the picture ceremonial solemnity. The artist impartially captured the appearance of a not young model, trying to identify the nature of the ruler. In her right hand, Maria Tudor holds a red rose – the heraldic sign of her family, in her left – gloves decorated with precious stones. A stingy flavor, precise elaboration of jewelry, the queen’s tense posture convey the incredible firmness, strength and authority of its character.