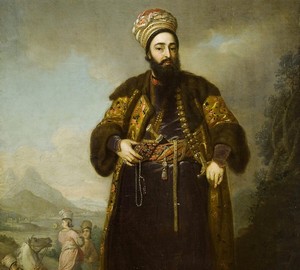 The brush of Vladimir Lukich Borovikovsky owns many portraits: ceremonial and chamber, female and male, military and state figures, emperors and empresses.

An example of a ceremonial, monumental portrait of that time is the “Portrait of Murtaza-Kuli-Khan”. The picture was written in 1796, by order of Empress Catherine II herself .

Before us is the Iranian prince Murtaza-Kuli-han, the sage of the ruler of Iran, Shah Aga-Muhammed-han.

Catherine favored the troops of Murtaza, supported him to strengthen in the northern territories of Iran, which were very important for Russian trade. But Murtaza-Kuli-khan, having suffered several defeats, escaped from his brother’s revenge in St. Petersburg, where he was graciously received by the empress.

Paying attention to how Murtaza looked around and was interested in the beauties of the Hermitage, Catherine ordered Borovikovsky his portrait.

The posture of the eastern khan is very majestic, important and even solemn. The left hand touches the saber, on the right hand are rosary showing his belonging to Islam.

Clothing is just luxurious. Thanks to the talented brush of Borovikovsky, we see how furs quickly spill over on the shoulders and sleeves of a rich cloak, how the velvet dresses flickers with deep sapphire, as the fabric on the headge reflects with golden glare, like jewelry on the ephesus and on the fingers nobly shine.

The prince’s face is very interesting: white, thin, with a black beard and sad, but in the east beautiful and mysterious eyes.

The common palette of the color scheme of the canvas can even be called noble and refined, pleasant to perceive. The background is a mountain landscape that smoothly turns into green vegetation.

In the same year, Borovikovsky wrote another sketch and a repeating portrait of Murtaza. In these works, the prince depicts mountains, people and horses.

Iranian Khan Murtaz was never able to return to his homeland, he died in Astrakhan in 1800.