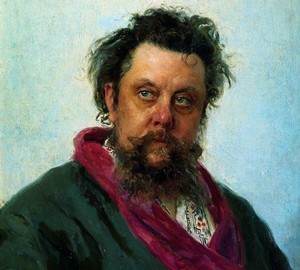 Portrait of M. P. Mussorgsky – Ilya Efimovich Repin. 1881. Oil on canvas. 69 x 57 cm
Among the portraits of the Repin brush, this work occupies a special place. As you know, the master wrote this portrait a few days before the death of the great composer, which gives the work special drama and depth.

Before us is an obviously seriously ill person: unhealthy redness of the face, shiny eyes. The author concentrates the attention of the viewer on the composer’s face, as if trying to convey the secret of the genius of Mussorgsky. Frozen hair, a neglected beard with a mustache, do not distract us from the main, from the look of the composer. In his eyes, sadness, longing is read. At the same time, these are the eyes of an energetic and strong person. The hospital gown, embroidered shirt is painted schematically by the artist, they do not emphasize the soreness, but are designed to serve as the framing of the main one – the face, head, which causes the turn of which allows us to think that until the last moment of life this person fought with his ailment.

The background on the portrait is “empty”, free from all sorts of details. You might think that Mussorgsky is depicted against the background of clouds. A sense of grandeur and greatness of the depicted is created. He himself is like his music: special, indomitable, powerful, unique. This music sounds in his eyes. There are also unfinished works, unincarnated ideas, music that he will never compose…