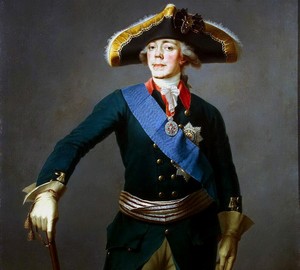 The portrait of Paul I is notable for the fact that no one has previously portrayed an imperial person. In the center of the canvas on a smooth, empty gray-green background, a king is depicted in the uniform of the Preobrazhensky regiment with a blue Andreevsky ribbon, on the head – a large black triangle. Refusing to stage with numerous allegories and attributes, Schukin chose the only true way to convey the inner loneliness of the emperor, hidden under the guise of a “dry messenger of power”.

The reign of Paul I was short-lived and ended on March 12, 1801, when he was killed in Mikhailovsky Castle.