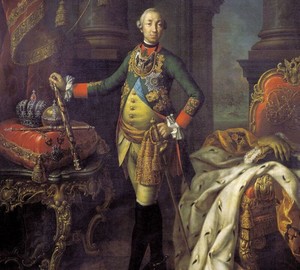 Portrait of Peter III – one of the most famous works of the artist of the XVIII century A. P. Anthropova. The picture was ordered by the Supreme Synod, in which the painter served.

Peter III – was the grandson of Peter I and the nephew of Empress Elizabeth. At a young age, the son of the Tssaarevna Anna and the German Duke arrived in Russia as the heir to the throne. Peter became emperor in 1761. He was overthrown by his wife, the future Catherine II, and, according to one version, was killed in Ropshinsky castle by conspirators. The history of his life is tragic, and the reviews about his person remained ambiguous.

Portrait of Peter III Antropov is performed in the best traditions of ceremonial art. The emperor is surrounded by a luxurious setting. In the background are marble columns with heavy draperies, you can see a window with a battery scene. Without winning a single battle, Peter loved military fun and parades. He considered Frederick Prussian his ideal.

To the right of Peter III there is a throne with a ermine mantle. A triangle and gloves are casually thrown above – as if the emperor had just entered the room. On the left, on a luxurious table, there is a red velvet pillow with royal attributes of power: a crown, a power, a scepter and a chain with the order of the holy apostle Andrei the First-Called, established by Peter I .

The sovereign himself is depicted in full height in the form of a leib-guardian of the Preobrazhen Regiment with officer crucible and a silver star on his chest. His pose is full of movement (he really was an energetic person), one leg is pushed forward, his hand rests on the Marshall rod.

The Antropov did not flatter the emperor, depicting him truthfully. The figure of Peter is far from greatness – long legs in high boots, bulging stomach, narrow shoulders and a small head. But Peter himself approved the portrait. This confirms the fact that a copy of it was ordered by the artist by the Senate. For her, Antropov received a fabulous fee of 400 rubles at that time.

After the revolution in 1918, a portrait of Peter III was transferred from the abolished Synod to the Russian Museum, where it is still located.