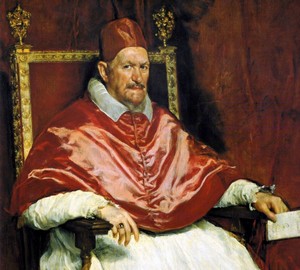 The painting was created at the time of the visit by the great Spanish artist of Italy, who was then the “mode legislator” in the field of art and famous as the birthplace of the largest and most talented masters of that time.

Pope Innocent X was considered a cruel, greedy and not too legible in his actions. But the story of this canvas says that the master once, by chance, saw the true face of the pope when he believed that no one saw him. The artist was amazed at the striking changes in the appearance of this man, exposed by exorbitant power – he was ordinary, alarmed and tense about something thinking, the same as all other people.

The master laid the foundation for his canvas. It is known that when looking at the finished picture, dad said with displeasure “Too true!”, but richly awarded the artist for his work.

Indeed, the picture is impressive for its skill and inner strength. This is a simple portrait in which dad is depicted sitting on a throne in the classic robe of Roman popes. The color scheme of the picture is built mainly on a combination of two colors – red and white. But the master was so good at transmitting the very texture of the materials that the picture does not seem boring or monochrome at all. On the contrary, it is harmonious and even elegant in something.

The first thing that attracts attention is the radiance of red satin on the top of papal robe. The fabric looks so realistic that you literally feel the smoothness of expensive natural silk. Matte white lace contrasts sharply with the rustic and rather rude face of the pontiff. His gaze is wary towards the viewer, as if he was waiting for some kind of catch or unpleasant comment.

Due to the extremely accurate transmission of invoices, the red color of the clothes is not lost against the background of the red velvet upholstery of the throne and the background of the picture, also made in muted reddish-board tones. This portrait has served as a model for copying for decades by students who sought to comprehend the basics of creating a realistic portrait.