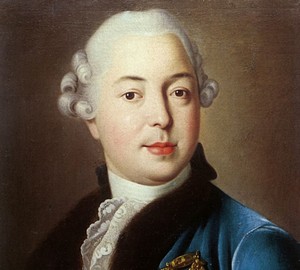 Portrait of Prince I. P. Golitsyna – Ivan Petrovich Argunov. Oil on canvas. 42 x 56 cm
Ivan Petrovich Argunov, the serf of Count Sheremetev, was a magnificent portrait painter who wrote many ceremonial portraits of high-ranking individuals. But over the years, he increasingly departs from the adopted canons of the ceremonial image, in his works the characteristic features and the inner world of the depicted people become more clearly visible. Before us is such a picture depicting I. P. Golitsyna. The composition of this picture is traditional for a chamber portrait: a neutral chocolate-brown background, a waist image, a figure in half-turn.

A young man stands at ease, turning his face to the audience. The head is raised proudly, in the majestic posture there is a sense of its significance and its own merits.

The hair of a ash and white wig in accordance with the fashion is combed back and collected in a pigtail pulled by a wide black bow. Small, neatly curled curls are laid above the temples. He has a smooth, slightly stray face with the upcoming second chin. Light light pink blush and coral lip color obscure pale cream skin shades. Soft shadows emphasize the straight line of the nose, the longitudinal dimple above the upper lip. Slightly swollen dark brown eyes look carefully and more amazingly, a little higher. A crafty and ironic smile lurked in the corners of her mouth.

The artist very carefully writes out his expensive clothes. Overflows of muffled blue and blue shades transmit the flowing movement of soft folds of velvet caftan, separated by a furry sable edge and decorated with intricate golden sewing. Under it you can see a camisole of heavy flickering silk of mustard, fastened with dark blue trilists. A bright accent of the outfit is a magnificent snow-white toad from the finest lace. Clothing emphasizes the status and wealth of a young man.

There are few main colors in the master’s palette – calm blue, golden yellow, brown and white. All this creates the image of a smart and educated nobleman, with exquisite secular manners and very confident in himself. This picture is among the best portraits made by Russian artists in the 18th century.