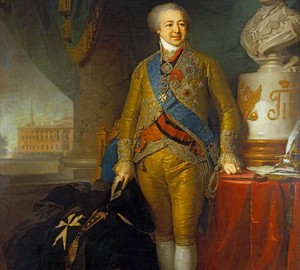 Vladimir Lukich Borovikovsky is a well-known and recognized master of portraits at the imperial yards of Catherine the Great and Paul I. The manner of writing is light, airy, in pleasant scales. All the Russians knew that time, dignitaries and their families wanted to be imprinted for descendants of Borovikovsky.

“Portrait of Prince A. B. Kurakina, written in 1801, is a classic of that time, a role model, a masterpiece of portrait painting. And not only due to the impressive size of the canvas, but mainly in the skill of performance.

The statesman Kurakin Alexander Borisovich is depicted in a ceremonial staged portrait distributed in the 18th century.

The face of Prince Kurakin gives him a great lover of luxury and pleasures, a condescending look – a rich aristocrat who knows the price. Borovikovsky introduced the prince in all his splendor, in the literal and figurative sense. At court, he was even called “our diamond prince.”.

And these words were heavenly. A competent and successful diplomat, prominent figure, vice chancellor, ober-stalmeister, senator, a man who deserves and appreciated by the monarchs. Accordingly, brilliant awards for the service, which you can’t even sweep on your chest, rich camisole, gold-covered, expensive ribbons, even shoes decorated with stones, all its image creates a sense of luxury and splendor. Everything that the author depicted on the canvas behind Kurakin also makes sense.

Nearby on the armchair, a cloak was casually dropped, with the patched golden regalia of the Order of the Maltese Knights, and the Mikhailovsky Palace is visible outside the window.

On the right of the table, covered with velvet, emphasizing the importance of Kurakin as a state husband, the author depicts papers, pen and inkwell. Above this rises a bust of white marble of Emperor Paul I .

The theme dedicated to Paul I is also not easy in the picture. The fact is that in childhood Kurakin and Grand Duke Pavel Petrovich were brought up together, under the supervision and mentoring of Uncle Kurakin – Panin Nikita Ivanovich. And, of course, childhood affection has grown into quite friendly relations.

Naturally, Borovikovsky was able to write the emperor into the canvas: the beloved residence of Paul I – the Mikhailovsky Palace, and the mantle, since Paul was the Great Master of the Order of the Maltese, and a bust almost the size of Kurakin himself.

Looking at the canvas, the artist’s idea becomes clear – to show a wealthy, influential at court, noble, high-ranking nobleman. For this, the entire surroundings of the prince and the interior, details of the palace interior are used. After all, such a famous state person simply cannot look anywhere even more magnificent than in the walls of the palace.