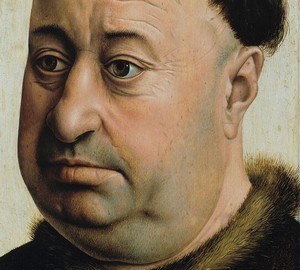 Among the works of Robert Campin, portraits written with incredible accuracy, with the smallest details, transmitting individual features and the inner world of real people, occupy a special place.

Among them there are two author’s versions of the same submersible image of a man, slightly different in size and color. It is believed that this is a portrait of the knight Robert de Masmin, the governor of Gennegau County, who died in the battle in 1431. He was an adviser to Philip III, the Duke of Burgundy, and among the first twenty-four knights he became the holder of the Golden Fleece Order.

Before us is a middle-aged man, far from the ideals of beauty: a full face, a massive second chin, a large nose with a curved tip, close seated eyes.

Slightly hanging eyelids, bags under the eyes, wrinkles, rays departing from the eyes and folds on the nose give out his age. A cap of short cut dark brown hair opens a high forehead.

Calmly posing for the artist, the knight cannot be distracted from his thoughts, his gaze is turned into himself. But with wisdom, determination and firmness are read in brown eyes.

The master writes with soft, smooth lines a scum of the face, a small dimple on the chin, full lips. But this gentleness is deceiving, in front of us is a smart, strong-willed and powerful person who knows the price.

An unusual for a painter is an almost ascetic palette of colors – a deep black and various shades of body and brown flowers. Small, inconspicuous strokes are transmitted by the artist light blue shaved cheeks and chin, warm color slightly tanned skin, pale pink scars, dark overflows of rich fur clothes. The light one-ton background of the picture is also not characteristic of the master, but thanks to him the image attracts all attention.

The artist does not idealize the appearance of Robert de Masmin, we see a living, real person, with his inner power and life experience. The highest skill of Robert Kampen is admirable, his portraits occupy a worthy place among the masterpieces of world painting.