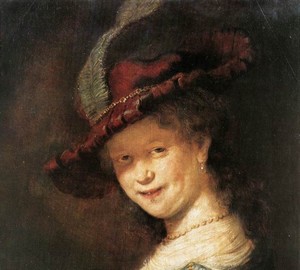 Around 1631-1632 Rembrandt moved to Amsterdam forever. He settled in one of the rooms of the film merchant Hendrik van Eilenbürch, who already had the daughter of his relative, Saskia van Eilenbürh. Young people fell in love with each other and got married two years later. The girl came from a wealthy family, so Rembrandt got into high society. One of the best periods in his life began, because he became the most famous artist.

Rembrandt’s wife was his most popular model. It was in the 30s that most of the portraits of the wife were painted. She was the artist’s favorite model. So, in addition to the presented picture, one can call “Flora”, on which Rembrandt portrayed Saskia shortly before the birth of their son Titus. Saskia served as a model for the famous “Danai” master.