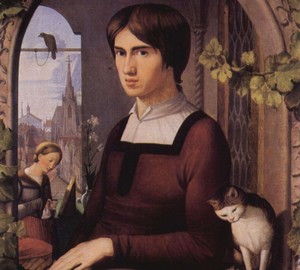 Johann Friedrich Overbek painted his friend in 1810, and in 1812 Franz Pforr was gone, he died at 24 from tuberculosis. For Overbek, this is a huge loss and blow, because they became friends while studying at the Vienna Academy.

Both from Germany, they immediately felt a commonality of views, both dreamed of a revival of German art through romanticism and religiosity, through the exaltation and morality that young people drew in the masterpieces of the past Renaissance. They imitated the great painters not only in the manner of painting, but in appearance. So, Pforr associated himself with Albrecht Durer, Overbek – with Raphael.

To this day, six paintings and several dozen drawings and drafts have come from the work of Franz Pforr. Both German artists were the founders of the society of St. Luke, which subsequently degenerated into the movement of the “Nazareans”, which laid the foundations of German and European romanticism, and in the future symbolism. This can be seen already in the early work of Overbek, in the “Portrait of the Artist Franz Pforr.”.

Here, each object is symbolic and aimed at the main goal of their creative association – the rapprochement of Italian and German painting, its renewal and rebirth. Arch and grape blaming branch with fruits, a clever bird, a girl with a Madonna face – these are typically Italian landscapes. The medieval strict Pforr costume and the Gothic view outside the window are already German leitmotifs.

But the essence of what the author wanted to convey is understandable – the legacy that the painters of Italy and Germany gave to the descendants belongs to everyone that their merger and rebirth will give impetus to a new, patriotic, aesthetic, highly spiritual art.

These two artists were faithful to their oath until the end of their lives (Pforr – short, but pure and moral, Overbek – long and worthy) and their activities and creativity gave fruit in the future.