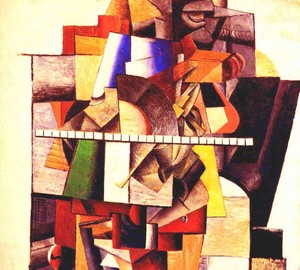 Portrait of the artist M. AT. Matyushina – Kazimir Severinovich Malevich. 1913. Oil on canvas. 106.5×106.7
By 1913, an artistic direction appeared among Russian futurists – Kubofuturism. Its creators sought to synthesize the ideas of futurism and cubism. The main task of futurism is to convey the feeling of movement.

The portrait of Matyushina Malevich (1878-1935) was composed of different geometric planes, which at first glance makes him related to the style of the cubic works of Picasso and Braque. But there is a significant difference: the founders of Cubism wrote mainly in monochrome technology, while Malevich actively uses the rich color scheme.

Another feature of the picture: with all the abstractness, realistic details are scattered on the canvas. So, for example, part of the forehead with hair combed in a straight sample, exactly repeats the hairstyle of Matyushin, according to the testimony of people who knew it. This is perhaps the only detail indicating that we have a portrait in front of us. The Matyushin was not only an artist, but also a composer, so it is easy to guess that the line of white rectangles separating the picture diagonally is the piano keyboard (and without black keys – a hint of the originality of the musical system of Mikhail Vasilievich Matyushin).