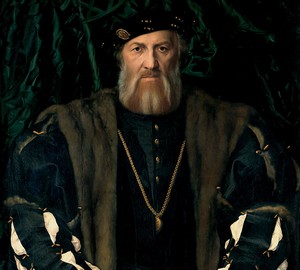 For a long time, two facts were not compared: the stay of Hans Golbein the Younger in London from 1532 and being there from April 3 to July 26, 1534 as an envoy to the English court of the French ambassador Charles de Sollier.

Golbane could write a portrait precisely during this period. However, since the ambassador’s name is not in the picture, it has been forgotten for several centuries. As a result, when the Elector of Saxon August III acquired this work in 1743 from the collection of the Moden Duke (with the mediation of Francesco Algarotti, the largest connoisseur of art of the 18th century), it was considered a portrait of the Duke of Milan, Lodovico Sforza, the brush of Leonardo da Vinci (the master was closely associated with the duke).

Only in the 19th century did it be possible to identify the model on the portrait: it turned out that this was the French ambassador, and its author was Hans Golbein the Younger.

The work stands out even from the magnificent portraits of Holbein of the mature period of his work. This is a recognized masterpiece of the portrait genre of the 16th century.