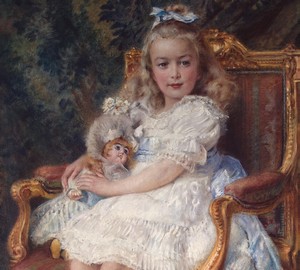 Konstantin Egorovich Makovsky began his artistic career as a participant in the Partnership of Travelers, exhibiting with paintings on the theme of the daily life of the people. However, over time, his interests changed, and since the 1880s he became a successful salon portrait painter.

Maria Nikolaevna was the third daughter of Emperor Nicholas II and Empress Alexandra Fedorovna. Four sisters were friendly with each other, but it was Mary who was considered universal favorite. Looking at the painting of Makovsky, it seems that the girl in a light white dress, clutching a doll to herself, only sat down for a minute to pose as an artist. Another moment – and she will slip off the big chair and rush to play with her sisters. The teacher of the royal children wrote that Mary was characterized by good health and kindness, was a beauty, although a little large for her years, for which relatives jokingly called her “good fat Tutu.”. However, the princess was not offended at all.

The fate of the young girl was tragic. In July 1918, Maria, along with the entire imperial family, was shot by the Bolsheviks in Yekaterinburg.