Portrait of the Leib Husar Colonel E. AT. Davydova, O. AND. Kiprensky, 1809 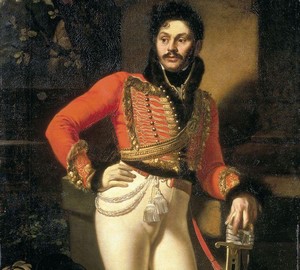 Portrait of the Leib Husar Colonel E. AT. Davydova – Orest Adamovich Kiprensky. 1809. Oil on canvas. 162×116
Orest Adamovich Kiprensky is the first Russian romantic artist. In portrait images, he embodied the aesthetics of romanticism, characteristic of the first half of the 19th century. Famous Art Criticist Baron N. N. Wrangel spoke of him: “All his art breathes a heavy forerunner of thunder, a premonition of thunder and lightning…”. The type of romantic hero developed by the era was called to confront and combat established norms and conventions of society. The cult of personality begins to chant in the painting of Kiprensky, in the poetry of A. WITH. Pushkin, M. Yu. Lermontova.

The hero of the wars with Napoleon, the gusar Davydov is depicted by the artist in an almost ceremonial manner, but is deprived of the inherent pompous representativeness of the genre. The negligence of his posture creates dynamics, striving towards a lively and smart look also tells the hero of the canvas the desire for active struggle, impulse. A hint of the tireless spirit and the desire to serve the highest romantic ideals, always doomed to face reality, is the pre-threat landscape captured in the background of the picture.

For this and a number of other portraits, the artist was awarded the title of academician of painting.