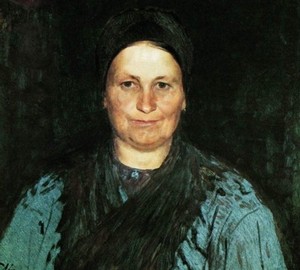 This portrait depicts the mother of the artist, Tatyana Stepanovna Repin, nee Bocharova. This early work of a young painter was performed during the holidays, when he, then a student of the St. Petersburg Academy of Arts, visited his parents in Kharkov region in the Osinovka settlement.

The picture, written with attention and love, creates an image of a strong and serious, but at the same time a kind and wise woman, to whom the viewer immediately penetrates with sympathy and respect. Tatyana Stepanovna’s benevolent face with a warm golden tone clearly stands out on the thick shadow of the background, and her dress and shawl are made with dark blue and blue flowers. All this makes a very vivid impression, a small canvas looks monumental and solemn, on it – a strong-willed and smart woman, a real mistress of the house.

In those days, the proportion of the soldier’s wife was not easy. The husband was constantly sent on distant trips, and Tatyana Stepanovna, living with children in a military settlement to feed her family, was forced to work hard on the most difficult and dirty work. But, despite the hard life, mother I. E. Repin, being an educated woman, was able to introduce children to books. She taught literacy not only for her children, more than ten children gathered in her house, whom the woman taught to read and write. Tatyana Stepanovna understood the painting and raised her love of art in her son.