Portrait of the philosopher Solovyov, Kram, 1885 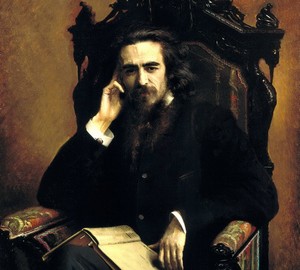 The name of the philosopher Vladimir Solovyov today is known only to specialists, meanwhile this person was bright and extraordinary. A poet, theologian, philosopher, critic, mystic and humanist. He has clearly opposed the use of such punishment as the death penalty against the killers of Alexander II. Among other things, Solovyov was a close friend of Kramsky.

As you know, the uniqueness of the portraits of the painter lies in the fact that, displaying his models, he not only sought similarity, but also sought the elusive internal component of each. This thrill is a prime example of this.

Vladimir Soloviev sits on a heavy carved armchair. His face is thoughtful and reflects great intelligence and a sharp mind. Everything in it gives out an aristocrat – deep eyes, the right nose, small brushes. A kind of combination of living mind and breed in the highest understanding of this word.

Dark tones prevail in the picture – a faint background, an almost black suit, black long hair. In this background context, the face of the philosopher becomes a plot accent, which is why so much can be read in it.

Vladimir Solovyov survived his friend Kramsky for 13 years, leaving many works and works. Its influence on culture, literature and philosophical thought is very difficult to overestimate.