Prayer for Salvation, Juan de Juanes – overview of the painting 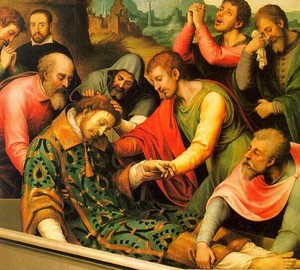 The prayer for salvation is Juan de Juanes. 1562

This picture – a complex multi-figure composition of religious content – can tell a lot about the artist’s work and skill. Without delaying the description of the sad burial plot, it is worth paying special attention to the picturesque and emotional advantages of the picture.

In the foreground of the canvas is a light object resembling a coffin or a stone base in which crying people put a richly dressed man with a tonzura on his head. One of the surrounding people – a middle-aged man in olive clothes with a hood – carefully looks at the lying one. Viewers notice that the man has a broken head – thin blood jets flow through his temples, forehead and neck.

After that, it becomes clear that the artist captured the moment from the Bible – the consequences of stoning Stefan the First Martyr, who was punished so for preaching Christianity in Jerusalem.

The fact that it is Stefan who is depicted is indicated by his outfit of the deacon, which is almost exactly reproduced in the picture written in 1562 – “The Stone’s Kazn”. According to legend, a saint with a stone-broken head, dying, prayed for his killers and humbly asked Jesus Christ to accept his spirit. At the death of Stephen, the “great cry” rose, as the first Christians loved and revered the righteous. This is the moment that the artist captured.

Despite the gloomy plot, the picture abounds with bright, juicy colors. The church robe of Stefan himself, as well as the clothes of the people around him, is incredibly beautiful. Olive, green and golden, as well as scarlet and ochry paint predominate in the color scheme.

In the background of the picture are visible the ruins of the city, depicted on three different plans. On the near-viewer, you can see part of the rock, overgrown with grass, the next plan is a reddish stone destroyed building, then drowning in a greenish haze against the background of the mountain city in ruins.

An interesting point is the presence on the canvas of the image of a man dressed completely differently from the rest of the characters. He is in black clothes with a modest white collar, does not weep like everyone else, and his gaze gives out his belonging to another era. Most likely this is an artist’s self-portrait.