Presentation of the ring to the rain, Paris Bordone, 1545 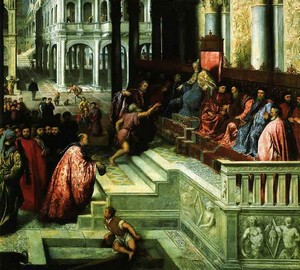 Presentation of the ring to the rain – Paris Bordone. 1545. Oil on canvas. Z70xZ00
Paris Bordone (1500-1571), an artist who left the Titian workshop, who experienced the influence of Giorgione and Lorenzo Lotto at different times, worked for a long time in France at the court of King Francis I. But still most of the work was created by him in Venice and other cities of Northern Italy. His art is particularly colorful and unusual in compositions.

“Turning the Doge Ring” is one of the few preserved historical monumental paintings of Bordon. It illustrates the latest episode of the legend of the fisherman, who had a vision of the long battle of Saints Mark, George and Theodore (according to another version – Nicholas), the patronage of Venice, with sea monsters sailing to the city from the island of Lido. After the victory, St. Mark addressed the fisherman with a speech that he would continue to defend his city, and in evidence asked to transfer his ring to Bartolomeo Gradenigo’s rain (Andrea Gritti in the picture). The viewer is witnessing this moment. The composition unfolds against the background of a magnificent scenographic and architectural perspective. The aspiration of the look deep into the canvas is restrained by the diagonal, composed of only a few of their figures, vectorly directed to the rain sitting on the throne elevation of “public loggia”. It starts with a figure in the turban. Her bluish hue fabric strangely rhymes with dressing sores, like the light gold ceremonial fereal gown – with a cloak and a cap of the “first Venetian”. This amazing colorful roll call may have been caused by concern for coloristic harmony, but probably carried some kind of information message in itself, which is not possible to accept today. The work was commissioned by the brotherhood of St. Mark for Albergo Hall.