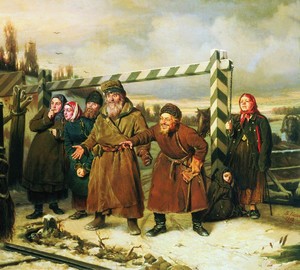 After appearing in Russia, the railway was a miracle for the people for a long time. Here the author offers us the usual scene for that time: the peasants came to see the technical divo. The main characters crowded in front of the paths, what they saw struck them.

The group of peasants can be divided into two parts: a pair of men in the foreground, delighted with the device they saw for clearing rails in the form of a regular and familiar broom, two women and a peasant who consider in great admiration, even with some fear, a steam locomotive. It is especially worth paying attention to a woman in a red scarf and uniform tug. Most likely this is a pregnant traveler’s wife, who is acting as a drunk husband. At the feet of the “watchman” a girl wrapped in a black salop, most likely a daughter.

The master brilliantly managed to convey the emotions of the heroes of the scene. The attention of the viewer is focused on the heroes, so the details and background of the picture are formal enough not to distract from the main one.

Each of the heroes feels its own story, its own biography. It is amazing how the artist managed to do this – to fill his apparently uncomplicated work with deep meaning and a special atmosphere that reveals the master’s plan.