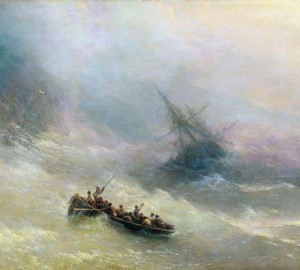 Creativity of the largest Russian marinist I. K. Aivazovsky is subordinate to the aesthetics of romanticism. Storms, winds often rage on its canvases, storms rise, attracting ships to death.

The unstable, ever-changing, mobile marine element not only prompted the artist to spectacular stories, but gave him the opportunity with extraordinary skill to transmit complex reflexes of light penetrating into the thickness of the water and reflected on its surface.

The motive of the rainbow is one of those favorite in the art of romanticism. The rainbow, which has risen over the storm sea, is a very bewitching sight, especially when a ship goes under its arc, being unable to withstand the raging waves. The high rampart hid the horizon, and people fleeing the ship are struggling with the elements.

Here, the rainbow is not just a rare natural phenomenon, in the image of which the artist can demonstrate his mastery of the painter. It becomes a symbol of the upcoming salvation of these unfortunate, their last hope, it is like a biblical symbol of the forgiveness of mankind.