“Reception of dowry in a merchant family by painting”, Vasily Vladimirovich Pukirev – overview of the painting 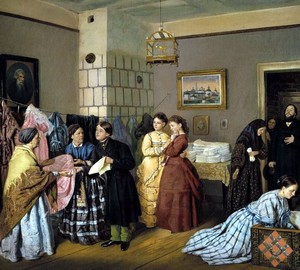 Reception of dowry in a merchant family by painting – Vasily Vladimirovich Pukirev. Oil on canvas. 73 x 66 cm
This is one of B.’s many paintings. AT. Pukireva on the topic of marriage and the position of women in marriage in the Russian Empire.

The canvas depicts a merchant house. The situation in it is not rich: several paintings on the walls, a cage with a bird under the ceiling, dresses are hung near the wall.

On the right, a woman and a child collect all the dowry of the bride in the chest. On the left, the clerk keeps the fabric and talks with two elderly women – obviously, the quality of some of the dresses did not satisfy him. Girls – the bride and, apparently, the sister or girlfriend are looking at this scene with sadness and despair.

The groom is standing in the doorway: he is watching what is happening with a arrogant look, and behind him are also relatives whose faces express both horror and curiosity. Pukirev conveyed a tense, unpleasant pre-wedding atmosphere in poor houses.

In his work, Vasily Vladimirovich repeatedly revealed the topic of how disenfranchised women who marry not of their own free will are, and how little feelings and true love are in this matter – all such marriages were based on the financial interests of the families of the bride and groom. The dowry for the future husband was even more valuable than the girl – Pukirev draws the attention of the viewer to this, emphasizing not so much the bride as her things.