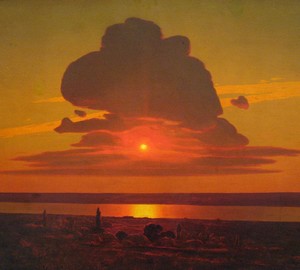 This picture is one of the last, largest works of the artist. The canvas has a difficult fate, it has been resold several times until it appeared in the United States.

The painting has a second name – “Red Sunset on the Dnieper.”. It depicts a river landscape in the style characteristic of the later works of the master. This is a vast, large-scale landscape of the view of the river valley, captured at the very hour when the sun setting in the clouds stains everything around with a magical reddish-gold color.

In relation to the image, the viewer and the artist himself are on a hill, and the landscape seems to be lying at the feet of people looking at the Dnipro Valley. Most of the canvas is occupied by the sky of an amazingly golden color. Almost in the center of it is a large cloud, which has an expressive complex shape. It is also painted in sunlight in the richest shades of red. Right in the center of the cloud, making its way through thin blurry rays, is the hot, sparkling with liquid gold sun. Due to the fact that it is covered with rather dense clouds, the light disk seems small, but very bright and simply tangibly warm.

The earth’s hardness lying below is divided by a river ribbon into three unequal longitudinal stripes, and the far bank of the Dnieper merges into one dark-board color spot with barely distinguishable silhouettes of buildings. The Middle Bank is more “readable”, high slender poplars, vaguely distinguishable houses and other details are visible. All of them are made in a single, warm color scheme with a predominance of reddish, cherry and brown shades.

But the most impressive in this picture is a river, the calm surface of which resembles a sheet of silver shiny metal. It clearly reflects the vibrating golden light of the sun. The rest of the river’s space on both sides of the solar track is flooded with the same warm soft light and color as everyone around in this picture.

In the ancient version of the Russian language, red was equated to beautiful, and the sun was revered as giving life to everything – both nature and man. According to critics, in this picture the artist demonstrated himself as a real sun fan. Well, if you take into account how respectful and love the master was about nature, you can understand why he managed delicious landscapes so much. In each of its canvases, literally worship is felt in front of the incredible beauty and power of Mother Nature.