“Repair work on the railway”, Savitsky – overview of the painting 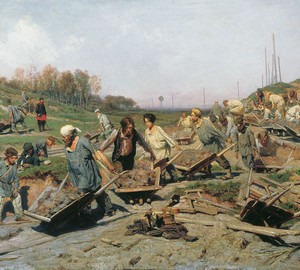 The presented picture is a very atmospheric work by Konstantin Savitsky. Here the author acted as a serious, attentive observer. A multi-figure composition with many elements has a very definite promise – the author sympathizes with the hard work of simple workers who rebuild the railway, armed with primitive tools (blopats, picks, wooden cars that cannot stand the burden).

The idea of the picture originated in the summer of 1873 in the Tula province, where Savitsky rested with his friends artists Ivan Kramsky and Ivan Shishkin. Living in the immediate vicinity of Kozlova Zasek station, the painters witnessed hard work on laying tracks. Savitsky almost went to the ways every day to write sketches and drafts.

The usual working life of a simple people is perceived as a feat. The everyday life of these people is filled with hard work, since of all the available forces in those days there was only draft and human (which was much cheaper). Savitsky sympathizes and admires the workers who, through their incredible efforts, bring to life the invention, beyond which the future is the railway.

But before us is not a faceless mass, the author intentionally distinguishes several men: a strong, sine man in a white scarf in the foreground, a gloomy worker whose face is full of black hair, a young kid who barely holds a heavy car.

The ordinary labor feat is performed against the background of an elegant village landscape. And this contrast also has its own dynamics: a calm, peaceful background and people outside this beauty, united in a hurricane rhythm, who set the creaky wheels of carts and heavy blows of axes.

The painting was first presented at the 3rd exhibition of editorial artists and immediately received high marks from critics and the public. As the highest measure of recognition – the purchase of paintings by Pavel Tretyakov. In 1878, the canvas was presented to the Paris public.