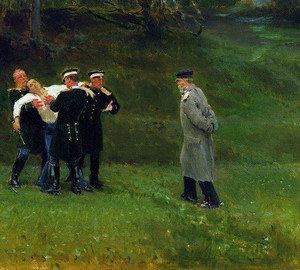 Duel – Ilya Efimovich Repin. 1913 year. Oil on canvas. 103 x 52 cm
The picture is a large canvas with several figures. The action takes place after the duel, when all the important events have already occurred. We see the consequences of the conflict – the wounded or dying support the seconds, the winner in the duel turned away from what is happening and looks into the sky. What is he thinking? About the won duel, about the injured opponent, about future consequences? We can only guess about this.

And now we see only the result – a young life is ruined, and you will not envy the second participant in the match either. Duelis are prohibited, and he will receive a link to places where death will follow him on the heels – to the Caucasus or Turkestan.

The picture uses saturated, dense colors, dark colors, against the background of which the snow-white shirts of dueling ones seem to glow in the dark. Events take place at the edge of the dark forest, the shadows from the figures are long, seasoned, so we understand that the matter happens in the evening. Composite figures of people are slightly shifted to the side to make the image less static. Their location is balanced by a very dark upper left corner of the canvas.

The figure of an officer in gray pays attention not only to the fact that it is highlighted in color. This is clearly the senior, not only in age, but also in rank of officer. One of the seconds is very expressive to him, asking how they should proceed. In this short-lived, the main intrigue of the canvas is concluded.