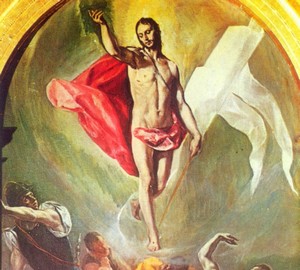 During his life, El Greco addressed the theme of the Resurrection of Christ several times. This work was created specifically for the Santo Domingo Church in Toledo. The picture adorns the right side altar. Researchers suggest that the artist began writing “Resurrection” immediately at the end of the central part of the altar.

The writing was preceded by an agreement according to which the church set the conditions – Saint Ildefons, patron saint of Toledo, must be present in the picture. The viewer immediately notices him in the lower left corner of the altar image.

It is believed that in the form of St. Ildefons El Greco depicted a famous person in Toledo – this is Don Diego de Castilla, who was the dean of the Cathedral.

The plot of the picture tells the viewer about the moment when Christ suddenly appeared in front of the soldiers who guarded his tomb. The white shroud flies away, the figure of Jesus covers the scarlet shroud. The right hand of the Risen One is fixed to heaven, the look is lowered, and the face expresses calm and humility.

And below chaos reigns – soldiers in fright rush and run away, stone blocks sparkle with sharp edges. Only St. Idelfons is serene and calm. It is as if he was not from this plot, but the viewer who waited for the sacred biblical event – the resurrection of the Son of God. The figure of the Holy balances a complex dynamic composition.

The most amazing thing is that Christ in the picture is not yet a heavenly incorporeal hero – it belongs to the earthly world. Christ is material and depicted in real space. Its special role is indicated only by a light weightless figure, more pale and simultaneously glowing from the inside with colors.

Subsequently, El Greco departed from such an unusual, “earthly” interpretation of Christ, bringing it closer to the traditions of iconography.