Resurrection of the daughter of Jairus, Polenov – overview of the painting 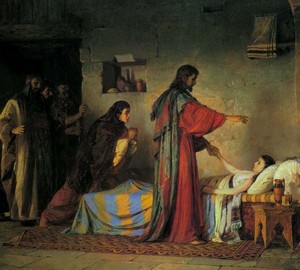 A popular biblical plot says that Jesus in the company of his faithful apostles – Peter, John and James – raised the dead twelve-year-old girl by the power of faith – the only child of the minister of the synagogue of Jairus. The master’s picture just depicts an episode when Christ commands a girl to get out of bed, taking her hand and forgiving her right hand over her. A mother froze in the legs of the bed in a prayer position, the disciples of Jesus and the frightened, desperate for a miracle father of the child crowd at the doorway. According to biblical tradition, Jesus ordered everyone to leave the room, and parents to feed the resurrected girl without telling anyone what happened.

The canvas depicts a spacious room in a stone dwelling, which immediately indicates to us the social situation of the girl’s father, Jairus. He is far from poor, since he can afford to have such a home and a rather richly decorated room. On the floor of neatly laid smooth stone plates by the patient’s bed lies a beautiful motley rug in burgundy golden tones with an intricate pattern. A little furniture in the room is the girl’s bed, a table covered with a rich tablecloth in her head, an octagonal stool with interesting legs resembling a stylized “lastochkin tail”, and a low pedestal under the window at the entrance to the room. The window shades the red curtain so that bright daylight does not bother the sick child. Above the new bed, there is a shallow and small niche in the wall in which there are various vessels – it acts as a shelf or hanging cabinet in this ancient dwelling.

Most of all, the girl’s bed decoration attracts attention. It is clear from him that parents love her very much and do not stingy on expensive things. A very large, volumetric roller made of thin white canvas is laid in the head of the bed; it is a piece of colored fabric, most likely a towel. Under the head of the child is a large white pillow, so the upper part of her body is raised quite high. It is covered with several rich and expensive bedspreads – from under the upper silky to the blue-golden wide transverse strip looks different, obviously wooly, white with wide inserts of woven ornaments in burgundy tones.

The girl’s pale skin and white shirt contrast with the dark figures of the adults around her. Only in the center of the picture does Jesus Christ look bright and visible thanks to his red chiton and color cloak.

With all the richness of the color scheme and numerous details, the artist managed to create an organic, integral image that amazes us with spirituality and the power of true faith, which raises even the dead.