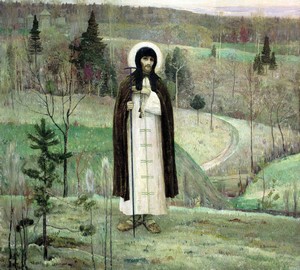 Mikhail Vasilievich Nesterov believed that for his triumph, a nation should have a spiritual guide who would become a moral guideline. Such a person for Russian people, Nesterov considered Sergius of Radonezh – the ancient Russian hieromonk. The artist seriously approached the study of the life of the “spiritual father of Russia”, studying the annals. Thus began the “radonezh” period in the work of Nesterov.

The Sergievsky cycle consists of a dozen paintings dedicated to the saint. The canvas depicts his childhood, youth, deeds and exploits. The master wanted to show Sergius not as a stern elder, but as a human and gentle one.

The painting “Rev. Sergius of Radonezh” was launched in 1891 and completed in 1899. For almost 8 years, the artist worked on the canvas. The author did not waste so much time on this creation, because it was important for him to bring it to perfection. The special status of the picture is emphasized by the fact that it was created by M. AT. Unster for himself. The artist gave all the previous paintings of the cycle to the Tretyakov Gallery.

Landscape against the background plays no less role than the figure of the abbot. Nesterov considered Russian nature to be animated, so he portrayed Sergius of Radonezh not next to monasteries and temples, but near the picturesque landscapes of Russia.

The very technique of writing the image of the Rev. is also interesting. The style echoes the traditional Rublevish manner of portraying saints, but at the same time is not without the influence of the new-fashioned style ar-nouvo.

There is nothing superfluous in the picture, laconicism and restraint is present in everything – in forms, color scheme, the number of elements in the front and back plans. Everything was created so that the viewer was not distracted from the original idea – a demonstration of the strength of mind, asceticism and wisdom of the great hieromonk, as well as its inextricable connection with nature.