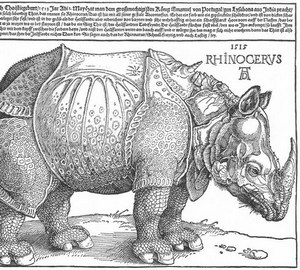 Rhino – Albrecht Durer. 1515. Gravure on a tree. 21.3 x 29.5 cm
Being, first of all, a painter and graphic artist, Dührer, like many major Renaissance masters, was interested in a wide variety of areas of knowledge. When the governor of Portuguese India from the eastern Sultan of Rhinos was brought to Lisbon as a gift, a friend of Durera, publisher and merchant Valentin Fernandez, sent him a letter describing and sketching the animal. Based on this information, the artist, interested in a strange creature, made two drawings, from one of which he performed an engraving.

Although the work had a number of understandable inaccuracies, like lat on the body or crest with a horn on the back of a outlandish beast, in general portrayed it correctly. In addition to the passion of the researcher, Dührer was driven by the desire of the Renaissance artist to feel connected with antiquity, because the rhino was an animal that was last seen in Europe by the 16th century under the ancient Romans.