“Runset at sea”, Ivan Konstantinovich Aivazovsky – overview of the painting 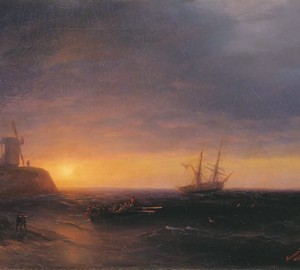 Sunset at sea – Ivan Konstantinovich Aivazovsky. Oil on canvas.
Two elements – marine and air, elusively changing every minute, always attracted artists who wanted to capture them on their canvases. The soft, gentle light of morning dawn, the bright colors of the blinding midday sun, the mysterious light of the moon or the flaming shades of sunset – all these moments perfectly conveyed in his paintings by Ivan Konstantinovich Aivazovsky.

He travels a lot, possessing good visual memory, he writes sea landscapes that amaze with their reliability and beauty. One of the master’s favorite stories is sunset at sea.

Low ash and gray clouds tighten the dark blue sky, leaving only a narrow strip at the horizon itself, where through the light frantic haze of fog rising from the water, a low-lying bright yellow sun is visible. Under its rays, the sky above the sea glows with warm honey-orange, gentle lilac shades, pale-coral lights lie on the clouds.

The sea is wollen endlessly, the water has become dark purple, almost black, and only the smoke-pink and reddish glare of the solar track gently pour. Waves with white foam on a crest with noise fight against the shore of a small bay. Gulls fly low above them.

On a narrow cape, near the water itself, placing the legs for stability, under the gusts of the wind, two people confidently stand, raising their hands in a farewell gesture. A third person helps a sailing boat overcome a big surf. The rowers work together with paddles, the captain stands on the bow of the boat. All his attention is focused on a two-masted sailboat standing near the coast, which is swaying on high waves. The setting sun illuminates its deck well, golden pink glare lies on masts and rivers. A strong wind blows the flag at the stern of the ship.

On a small rock facing the sea, there is a windmill. Work is still boiling on it – in the sunset sky the outlines of two people standing at the edge and the figure of people wearing bags are visible.

Near the mill in the evening twilight the walls of a small hut with a straw roof whiten.

Cold purple and blue-black tones are combined with warm orange and yellow-pink paints, transmitting a sense of anxiety and an upcoming storm. With elusive shades, he manages to convey the real movement of waves and clouds.

But we believe – the ship will sail and pass through the storm towards a new day.

The picture inspires confidence, gives hope. We admire the skill of the artist, who managed to convey the living beauty of the evening sea.