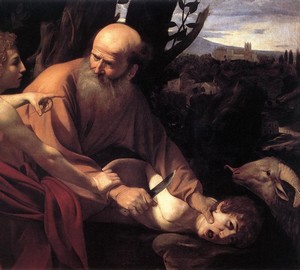 The drama that grew in the work of Caravaggio was fully manifested in the presented work, all the more this was facilitated by its plot. The painting was written for Cardinal Maffeo Barberini, whose patronage was used by the artist. He depicted the moment when the biblical elder Abraham was about to sacrifice his son Isaac, as ordered, in order to make sure the depth of his faith, God.

In the shortest time span, Caravaggio managed to accommodate several intense actions performed by the characters: his father, holding his son’s head tied with his hand, brought a knife over him, his son screams with fear, but the angel sent by God stops Abraham and points him to the sacrificial ram.

The picture is so full of emotions that even an angel looks worried, and an lamb with an anxious look pulls his head, as if praying to put it in Isaac’s place. The horizontal composition stretches in time all the actions of the characters, forcing both them and the viewer to experience the drama presented here even more strongly. No wonder the painting of Baroque, the founder and one of the brightest representatives of which was Caravaggio, was inherent in the tension of passions.

But the artist did not just depict human experiences at a particular moment – he went on, deepening them psychologically. So, on the face of Abraham are reflected the source faith and paternal love fighting inside him. The freshing landscape in the background reinforces drama, but the city on the mountain and the bright distance of the sky emphasize the successful outcome that is about to come.