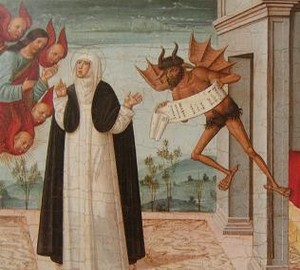 Saint Catherine of Siena asks Christ to set Palmertina – Girolamo di Benvenuto
Girolamo di Benvenuto worked mainly in Siena and its environs, so St. Catherine, the patroness of this city, often appears in his works. On a small panel, the creation time of which is unknown, an episode from the legend of her and another Dominican nun named Palmertina was transmitted. Contrary to Catherine’s attempts to make peace with Palmertina, she had an implacable malice to the saint. Despite this, when Palmertina became fatally ill, Catherine prayed that she would not be condemned to eternal torment, dying unrepentant. The first part of the panel depicts Christ surrounded by cherubim, who appeared to Catherine during the prayer and warned her that Palmertina was not saved; behind Catherine’s back, the devil, who usually had sinners on duty at the deathbed to abduct their souls, keeps in his paws a long list of Palmertina’s sins. The prayers of Catherine ultimately persuaded Christ not to let Palmertin die until she completely repented, and thereby deprived the devil of prey. On the stage on the right side of the panel, Catherine and the monk are present at the deathbed of Palmertina, who finally completely repented and reconciled with the saint.

SV. EQUATERINE SIEN. Catherine (approx. 1347-1380) resisted the attempts of her parents to marry her and entered the order of the Dominicans to take care of the poor and sick. She experienced many mystical trials: in one of them, Christ offered her a choice of two crowns – gold and thorns, and she chose thorns; in the other she received stigma; and, like Catherine of Alexandria, entered into a mystical marriage with Christ.

Catherine devoted her whole life to strengthening and purifying papal power. She is considered the patroness of Italy and is revered in her hometown of Siena, where Domenico Beckafumi (approx. 1486-1551) depicted her in white monastic clothes (to convey her purity), receiving stigma. On other paintings, she is in black and white vestments of the Dominican Order, can hold lily or beads or show her poems.