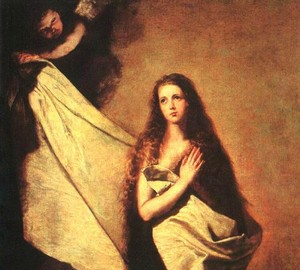 “Saint Inessa” is one of the most famous and popular paintings by a Spanish artist. It was written in the mature period of his work, when original gold and silver shades appeared in his works, different from the dark and deep colors of the early, “Karavadzhiev” period.

Saint Inessa is a young girl, a teenager who was put on public display completely naked. She was so punished for refusing to renounce the Christian faith. But the cruel-hearted scoffers failed to make fun of an innocent girl for a long time. Her hair suddenly began to grow and soon the whole body was covered with a violent wave, hiding it from obscene and rude views. To top it off, an angel came down from heaven, who covered a young Christian with a veil.

It was this climax that depicted de Riber on his canvas. St. Inessa is not captured on him as a victim of rudeness and misunderstanding, but as a completely innocent and pure creature in his faith. This is a fragile teenager with thin arms and legs, delicate skin and a truly angelic expression on his face. She is not scared, although she should have. Inessa prays, she believes so deeply that she is convinced of her safety.

It is believed that the artist wrote a holy martyr with his daughter. Well, be that as it may, the image of a young, immaculate virgin succeeded him perfectly. She has delicate, white skin, pink blush on her cheeks, huge dark and expressive eyes. This girl is beautiful bodily and spiritual.

On the canvas there are completely no foreign parts that distract from the main plot. The picture is made in restrained golden brown tones, its background seems to dissolve in radiance emanating from the figure of a young saint. It kneels on the bare, rough floor of stone tiles – that’s all that is available to the audience from the surroundings. The diagonal composition, which makes the canvas dynamic, is emphasized by the location of the figure of the angel and the panel brought by him, with which he envelops the figure of St. Inessa. The cloak itself is also made in golden tones, which gives it radiance and emphasizes its heavenly origin.

The light skin of a saint is emphasized and made shining dark hair, completely enveloping its figure. It is as if they separate her body from everything negative that surrounds her in this world. The girl looks protected not only by an angel cloak. No one is allowed to disturb her innocence with a dirty look or shake confidence in her faith, because she is under the protection of God himself.