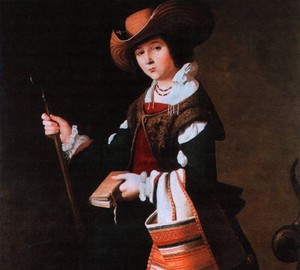 Most of the works of Surbaran with images of holy virgins were ordered by the artist in the form of series and mainly performed by his assistants. In 1647 he received an order for 24 such paintings for the monastery in Lima, two more years later – for 15 for Buenos Aires. However, work with St. Margarita of Antioch was written earlier and, undoubtedly, is the creation of the master himself.

Margarita of Antioch is the legendary Christian maiden. Her life tells that the prefect of Antioch wished to marry her, but she refused, saying that she was the bride of Christ. The maiden was brutally tortured and imprisoned in an underground dungeon. There, in the form of a dragon, Satan appeared and gobbled it up. But the cross that she held in her hands made the monster open, and Margarita went outside. She was beheaded after the prayer that pregnant women who called to her could safely give birth to their children, just as she herself appeared unscathed from the womb of the dragon.

Margarita was once a revered Christian saint, as she was considered the patroness of women in labor. However, due to the lack of evidence of the authenticity of history in 1969, it was excluded from the church calendar. Surbaran created a worldly image that contrasts sharply with the entire system of Spanish religious painting of the 17th century. This is practically a portrait of a peasant woman: she is depicted with a shepherd’s staff, in a straw hat, with a pre-window bag with an intricate ornament. The fact that on the canvas is a saint can only be guessed by traditional attributes – the dragon and the book in her hand – certainly the Bible.