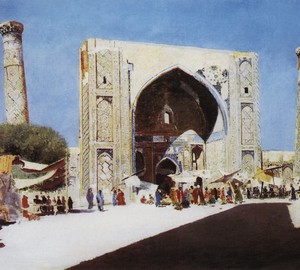 The painting “Samarkand” by Vasily Vasilievich Vereshchagin depicts the famous Registan Square in front of the Ulugbek madrassah. Since ancient times, Registan was considered the city center and the main market square. It was here that the most significant holidays and the largest trading took place. Over the square for many centuries, the endless hum of traded merchants and buyers rose, the reproaches of the drivers, the sounds of music, singing and prayers were heard.

The painting was written in 1869 and entered the special Turkestan series of the artist. After participating in the defense of the Samarkand fortress, Vereshchagin was fascinated by the search for a new writing technique and the transmission with the help of a brush with a tart, colorful atmosphere of oriental life. In the end, the cycle combined thirteen art paintings, eighty-one sketches and more than a hundred sketches.

In many paintings of the Turkestan series you can see the image of the main square of Samarkand, both during celebrations and on weekdays.

The Samarkand canvas is an illustration of the daily life of the city. In front of the audience, in the rays of the hot sun, a view of the small market opens. The product is located, most often, simply on carpets under improvised canopies, few buyers roam between them. There is a feeling that the square has long lost its former glory. The bazaar seems like a quiet and provincial place, and the madrassah in the background carries traces of desolation and slow destruction.

The Turkestan series incredibly surprised both spectators and professionals. Pictures of this cycle were too unusual, original, bright. The abundance of colors, the juiciness and liveliness of images born by the artist’s skill for many of his contemporaries have become a real revelation. Not all Russian painters accepted and understood a similar manner of writing, however, later the pictures of the cycle began to be considered the standard of the new Russian school, and Vereshchagin her pride.