Scientist in the Cabinet (Ravvin), Rembrandt, 1634 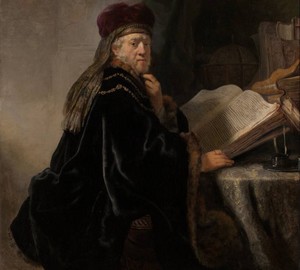 Representing a scientist in his office, Rembrandt (1606-1669) uses the type of human image that developed in the XVII century in Flanders for his professional career. But he, unlike the Flemish masters, manages to avoid the feeling of positioning the model, which makes the picture, losing the features of officiality, more natural.

Striving for maximum vitality, Rembrandt accurately conveys the position of a huge foliant on the cigarette case and slight dissatisfaction in the view of the scientist: this is how a person looks, disturbed by his favorite thing. A few years earlier, in 1629, in Leiden, the artist had already addressed a similar plot. He commissioned a portrait of a scientist (National Gallery, London). Having revised the experience gained, the master enriched the image: on the presented canvas, not just a serious and educated intellectual, but a wise, experienced elder. An unusual and very picturesque model was chosen for the picture. At this time, the artist was familiar with the rich merchant Eilenbürch, and he was often posed by Jews of the Amsterdam ghetto. This portrait was previously even called “Ravvin.”.

Compared to the London canvas, the arsenal of expressive means used by Rembrandt increases and becomes more complex in this work. The effects of light, remaining powerful and impressive, acquire great sophistication, and color paintings – warmth and nobility. The picturesque manner is also distinguished by amazing skill: the smear is placed strictly in shape, revealing its features. The artist manages to almost touch the softness of the yellowish skin of the hands of an already aged person, the smooth surface of the book sheet and the loose fabric of the tablecloth. The portrait conquers with a depth of psychological characteristics and sincere attention to the inner world of the model, distinguishing the mature and later creativity of the great Dutch painter.