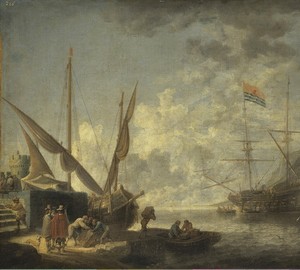 Seaside Harbor – David Tenirs the Younger. The beginning of the 1650s. Oil on canvas. 58.5×83.6
This canvas depicts a port, not in Northern Italy, where Tenirs has never been, but possibly in Dover in England. The artist visited this country twice – in 1635 and 1651. In 1863, it was noted that the frigate standing on the raid depicts the coat of arms and flag of the Dutch province of Zeeland. The awakening of nature is perfectly conveyed by the tennis court: clouds roaming from the rising sun; the sea, freed from the morning fog, the surface of which is drawn by a shallow ripple; rocky pile illuminated by sunlight. Against the background of the rocks, the silhouette of a warship with Dutch flags fluttering on masts looks especially spectacular. The creation of human hands is compared here by the artist with the perfect creation of nature.

The picture can be dated to the 1650s – such a solution is prompted by the silver-blue tone of the color, characteristic of this period of the master’s work.