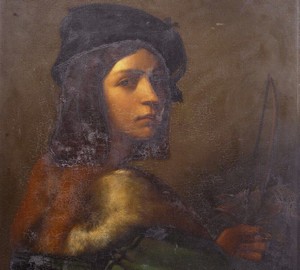 Sebastiano Luciani, known as Sebastiano del Piombo, was born in about 1485 in Venice. His nickname has nothing to do with his artistic work and creative style. It arose after he assumed the post of nakladyvaya lead seals on the documents of the papal court and the Vatican. From the word “lead” and gave him the nickname “Lead”, which is preserved in history.

Born in Venice, the master in the early years of his activity he experienced a serious influence of such famous artists as Titian and Giorgione. Since he was a pupil of Giovanni Bellini, in his work, of course, the impact and influence of the artistic style of the teacher.

In 1511 Sebastiano moved to Rome at the invitation of the famous banker to decorate his Villa. Villa Farnesina is preserved until our days impressing his forms, style and decoration. This fact suggests that the young artist enjoyed great success and reached a fairly high position in the then the multitude of talented artists in Italy. Interestingly, in the future, the artist appeared suspended from work, as the client did not like written by him frescoes – illustrations for “Metamorphoses” the Roman poet Ovid.

Despite the setback, del Piombo never leaves Rome. This has a positive impact on his creative manner, as he met Raphael, one of the three titans of the Renaissance. His influence on the works of Sebastiano put it in a more balanced and proper composition, simple and elegant style of the image. However, the paintings of the masters have preserved the characteristic of Venetian painting color, which has a positive impact on the quality and showiness of the image.

Early works have a rich flavor, but without the bright colors. In his paintings the influence of Titian’s painting with soft color combinations and rich shimmering colors, as if steeped in mist. Subsequently, the color scheme of the paintings is a little reduced, and a preference for more subdued colors. But the impression on the Venetian style persisted until the end of his days.

If Rafael had made harmony in the artist’s work, the influence of the rebel of the Renaissance – Michelangelo Buonarotti – changed the style of the master, making it more dark and harsh. The best painting of this period is the “Resurrection of Lazarus”, which took two years – between 1517 and 1519.

Later works, written during the counter-reformation, characterized by the understated colour, the dark tones and bleak themes.

In 1527 due to attacks on Rome, the artist returned to Venice, where he created several famous paintings. Among them, harsh and dark “Christ carrying the cross” and a splendid portrait of Andrea Doria, the famous Venetian Admiral and statesman.

Returning to Rome four years later the artist becomes a Keeper of the papal seals. By receipt of this lucrative and honorable post master had to take the tonsure and became a monk. In the last years of his life he wrote exclusively of portraits, among which were the images of his benefactor Pope Clement VII, Christopher Columbus, Pietro Aretino, Julia Gonzaga and many other famous people of that time. He paid much attention to and creating poetry.
The artist died in Rome in 1547. His work was honored with the descriptions in the writings of Giorgio Vasari.