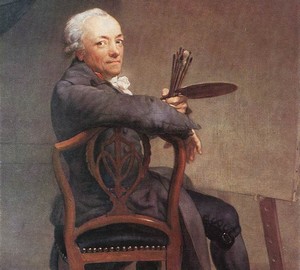 Self portrait at the age of 58 – Anton Graf. Oil on canvas. 168×105
Anton Graf (1736-1813) is a great German portrait painter with Swiss roots. In 1766 he became a court painter in Dresden and a teacher at the Academy of Arts. Naturally, many works fell into the Dresden Gallery. The textbook images of the figures of German culture of the 18th century – Lessing, Gerder, Schiller, Gluck, Khodovetsky, Kleist – the creation of the Count brush. His main work was a portrait of the Prussian king Frederick the Great. The master created more than two thousand works (their majority has been preserved), mainly portraits, and mostly male ones. In them, he unusually accurately conveyed the appearance and nature of his models, presented them in natural poses. Therefore, the portraits of the Count are a reliable document of the era when there was no photograph, they give an adequate idea of the identity of the portrait. All of the above fully relates to the submitted self-portrait.

In total, three Count self-portraits are stored in the Dresden Gallery – in addition to the two mentioned, there is also an image of an artist at an advanced age.