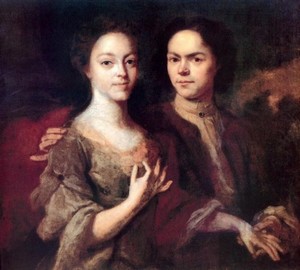 Self-portrait with his wife – Andrey Matveevich Matveev. 1729. Oil on canvas. 75.5×90.5
Andrey Matveevich Matveev (1701 / 1704-1739) is a unique master of the first third of the 18th century, belonging to the galaxy of the first students of Western European masters. It is curious to note that the picture “Auto portrait with a wife” is, in fact, the first and only example of this genre of this era. Self-portrait as a way of self-knowledge is a stage of development of portrait painting, which will be distributed only in the second half of the 19th century. Portraying himself with his wife, Matveev does not set himself the task of psychological analysis, in a paired portrait there is a desire to declare oneself as a person, to designate the artist’s place in the Petrov time of fundamental reforms and military victories.

The master and wife are captured during a walk, which is indicated by nature in the background of the waist image. In touching charm of faces, an attempt is made by the painter to perpetuate his family idyll and the happiness of mutual love in the canvas. The painting did not leave the walls of the artist’s house until his death.