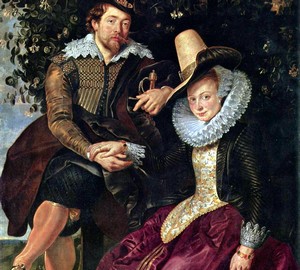 1609 was very successful for a painter – his fate brings him to the court clerk of the city, Jan Brant. Brant had a young eighteen-year-old daughter, Isabella, who simply captivated thirty-year-old Rubens. In just a few months, they will enter into a legal marriage based on a tender mutual feeling.

Of course, the artist wanted to portray his happiness on the canvas, and in 1610 he graduated from his famous “Auto Portrait with Isabella Brant.”.

The canvas is characterized by virtuosity and brilliance. From the first minutes of contemplating the work, the attention of the viewer is attracted by the composition of the picture – it is far from ordinary ceremonial portraits. The artist sits freely and at ease, throwing his leg on his leg. Nearby is the beloved spouse, on whose face a mysterious half smile plays, and the hand gently touches the artist’s hand. This laid-back posture, the frank tenderness between the portraised, gives the picture a lyrical pastoral mood.

It seems that everything in this work follows the canons of the ceremonial portrait – rich costumes, and the background, and the one with which the heroes look at the viewer, however, Rubens managed to avoid the static nature of this genre, filling it with love and personal feelings. The artist did not easily portray himself with his wife, but also demonstrated his attitude to marriage – this is an absolutely equal union, built on love and trust.

The background plays great importance in the picture – this is a realistically embodied landscape where you can notice a folding bush of honeysuckle, grass underfoot, endless sky behind the backs of heroes. At the same time, the author so inscribed them with the wife of the figure in this landscape that it seems as if the picture was written on the open air (although this tradition will find its embodiment only among the Impressionists many years later), and the whole composition looks very real.

Despite a significant age difference, Rubens was much experienced by his young wife, whose life was claimed by the plague in 1626.