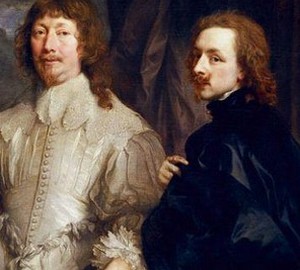 Self portrait with Sir Endymion Porter – Antonis van Dyck. Around 1635. Oil on canvas. 119 x 144 cm
The work of Van Dyke (1599-1641), a supporter of Flemish realism, determined the development of the aforementioned school of painting of the second half of the XVII century in the direction of secularism. The artist of exceptional talent and talent created images that characterize an entire era. The types of aristocratic and intellectual portrait developed by the painter influenced further European portrait painting.

On the canvas, the artist contrasts himself with Endymion Porter, who has simple bourgeois origin, but who has achieved honor and high noble titles. To demonstrate the beautiful shape of the head, subtle facial features, laid-back graceful pose, the painter favorably portrayed himself in a three-fourth turn. The royal bed looks rustic, on his face there are no signs of innate nobility. The fact that the men depicted in the portrait are friends can be judged by the position of their left hands, symbolically lying on the stone. However, the artist’s brush is dressed in leather gloves, although the cloak visible near the lapel his right hand is naked. Perhaps this is a hint of the nature of the friendship of heroes.