“Seven mortal sins and the last four things,” Jerome Bosch – a description of the picture 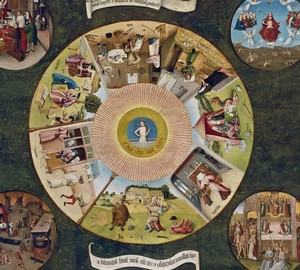 Seven mortal sins and the last four things are Jerome Bosch. 1475-1480. Board, oil. 120 x 150 cm
This original picture, relating to the early period of the artist’s work, is often called the countertop for her appearance and purpose, which she never realized. The picture is distinguished by its original solution and design, containing several interconnected stories at the same time.

If you look closely, the deep symbolism of the image will become clear. In the center of the picture, a round element, consisting of four circles of different sizes of concentric shape, embodies the idea of Bosch about the All-Seeing God’s Eye. His pupil is an image of the risen Jesus Christ, pointing to the wounds that he received, suffering in the name of atonement for the sins of all mankind. Around the divine “bump” on a golden background is an inscription on Latin, meaning that God sees who, how and with what sins. She is surrounded by subtle golden rays emanating from the son of God, as from a luminary.

The next circle is the iris, divided into separate sectors, dedicated to seven deadly sins. Each sin is signed with its own explanatory inscription. But the artist so expressively depicted all the sins that it seems to be just an unnecessary action. The sin of gluttony is a man who literally sweeps off any food appearing on him from the table, another dense gentleman who sluggishly at the hearth is the embodiment of despondency. Lovingness is kissing and hugging couples, pride – a woman who looks narcissistic in the mirror, fighting drunkards – this is anger, a judge accepting a bribe – greed, envy – this is how a person who loses his lawsuit looks at his lucky opponent.

All these sins, so understandable today, are enclosed in a circle that emphasizes their cyclicality, repeatability, constant presence in human life. And now, after half a millennium, in our life there is still room for all these mortal sins, so the picture of Bosch remains relevant in the 21st century.

At four angles of the picture, also inscribed in circles, are images of four most important things – Death, Last Judgment, Hell and Paradise. Labs with Latin inscriptions are placed above and under large concentric circles.

The painting in this masterpiece of medieval art is very detailed and realistic. Color, even multi-colored circles are placed on a straight black background, which perfectly shades and emphasizes bright colors. The characteristic metaphorical style of Bosch has already manifested itself in this picture, but it does not yet have so many monstrous irrational and otherworldly characters as if born in a heavy delusional dream.