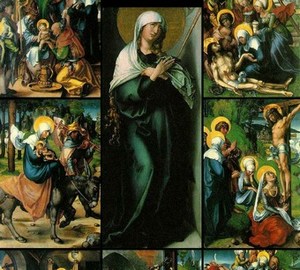 The seven sorrows of the Virgin Mary – Albrecht Durer. Around 1496. Wood, butter. Central panel – 109 x 43, side – 63 x 46
Albrecht Durer is the largest German painter and engraver, one of the greatest masters of Western European art of the Renaissance.

The presented picture refers to the early period of the artist’s work. It depicts the long-suffering Virgin Mary, her heart pierces the sword (allusion to the Gospel words of Luke: “And the very weapon will pass the soul for you”). Seven sorrows were proclaimed a church holiday in 1432 by the Cologne Cathedral in order to form a corresponding parallel with the then-existing holiday of the Seven Fights.

According to the canon, Dührer depicts the Seven Frieves in seven stamps framing the central image. The picture must be viewed from the upper left mark down, at the lower horizontal (from left to right), then the right vertical (from bottom to top). Thus, seven evangelical stories are presented: the representation of the Lord in the Temple (cutting, that is, the first shedding of the blood of Christ), fleeing to Egypt, Christ lost by His Mother (in the version of this story as a dispute with doctors), the path to Calvary (baptism of the cross), the crouching, crucifixion and mourning of Christ.