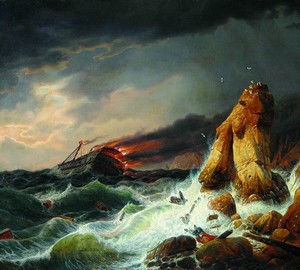 High rocky mountains formidably rise on the shore. Their steep walls, covered with cracks, abruptly break into the raging sea. Wave shafts with a roar break down on the lower ledges of the rocks, roll over the large boulders lying at the foot of the cliffs. Only gulls curl over the peaks.

Not far from the coast, a lost sailboat is crashing. The storm wind drives him to the coastal rocks. There is a fire on the ship: all the feed is engulfed in flames, black clubs of smoke are laid over the sea. The last burning mast is about to collapse.

The teams are not visible, only the lifeless body of one of the sailors, along with the wreckage of the ravines, was carried ashore.

The storm is ending. The first sunlight breaks through the tears of thunderclouds. In some places the blue sky is peering. But the sea element is still strong, high uncontrollable waves are sighing, and a sinking ship covers the shadow.

To convey the power and power of the elements, the artist uses dark, saturated colors – lead, gray-pissed colors of clouds, blue-green tones of the dark sea, brown-black shades of stone. Tragicity is added to the image by bright orange-red flames.

Each detail is worked out by a master who knows and loves the sea. The picture is very realistic, you can feel the impulses of the fresh wind and salty spray, hear piercing bird screams breaking through the roar of the surf.

The majestic and disturbing beauty makes us worry, but the coming day brings light and peace.