“Shooting guild of St. Adriana ”, France Hals – a description of the picture 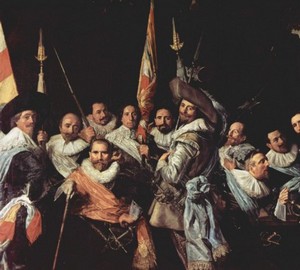 Group portrait – “Shooting guild of St. Adriana ”- was written by Hals in 1633. The turbulent cheerfulness of the paintings of 1627 gives way to a much greater restraint, a dynamic composition based on emphasized diagonals – a calm distribution of figures horizontally. A huge canvas depicts a bunch of open-air shooters.

Apparently, the case is happening in the courtyard of the Old Rifle Guild, the building of which has been preserved in Harlem so far. The yard is overgrown with tall dense trees, their dark brownish greens serve as a background for elegant figures. The surviving old copies from the picture suggest that the colors of the landscape darkened somewhat from time to time; initially it was brighter, more clearly were the spatial relationships between individual trees, etc. p. Now the trees make up a single gloomy mass, a hint of the mysterious poetry of the evening appears in the picture, the reflection of this poetry falls on people, the whole scene seems beautiful and significant. It is difficult for us to judge how much these or those colors have changed, and how these changes affect our perception, but we can say with confidence that Hals himself sought to give his work a romantic upsurge and beauty.

The left side of the picture is occupied by a dense group of officers surrounding Colonel Johan Klas Loo. The colonel himself – an elderly charlemic burger – has the authority of power, mind and willpower. His “patch” also has many bright, albeit not so significant, characters. So, the mood of the picture, the impression that it makes, is largely determined by the figure of Captain Schatter, standing sideways to the audience to the right of the colonel. Tall and beautiful, in a light yellowish suit, with a magnificent blue officer scarf, Schatter with a captivating smile, shining his eyes, turns to the viewer. The essence of his posture, enchanting expression of his face at the same time and is natural and slightly underlined. It seems that he enthusiastically plays a role, plays easily, because she is perfect for his “data”, corresponds to his nature. It is interesting that the image, which serves as the key to the romantic poetry of the picture, conceals the share of irony, and, moreover, the irony of not only Hals, but, possibly, the “actor” – Schatter. Finally, in the right part of the picture stands out the smart, subtle, assembled captain van der Horn, who stood half-turn to several shooters, whom the artist freely seated at a simple wooden table.

The role of the key image that brings us into the world of paintings is played here by three and three such different characters as Colonel Loo and captains Schatter and van der Horn. Perhaps this most clearly showed the complexity and diversity of the content of this almost the most beautiful of the portraits of arrows written by Hals.

A curious detail: at the right edge of the canvas with a book in his hands is the lieutenant Hendrik Gerrits Pot, a famous Harlem artist. After this work, Hals only twice wrote group portraits of shooters. One of them remained unfinished, the so-called “Witch company” in the Amsterdam Reyksmueyum.